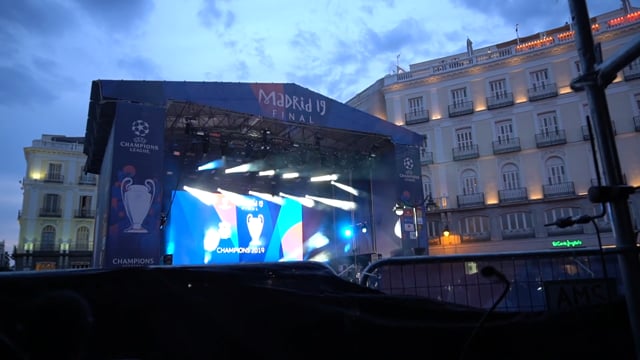 Madrid hosted the Champion League final on 1st June, and Light Project was its Producer.

Endless activities for the fans of both teams awaited in the capital of Madrid.

Light Project faced this production as a great challenge, 3 months of pre-production paid off.

In the Puerta del Sol, the epicentre of the activity, the different sponsors had their area, and the main protagonist was the Cup.

A stage where we could see Carlos Vives, Sebastián Yatra and Dimitri Vegas & Like Mike among others.

In Plaza Mayor, a «Pitch» created in-situ for club meetings and football matches of different categories.

In the Galería de Cristal of the Madrid City Hall, the night before the match, the Gala Dinner was held, a dinner with a performance by «Los Vivancos».

On the big match day, the two fan zones, Plaza de Felipe II and the area around the Wizink Center, hosted more than 100,000 fans of both teams.